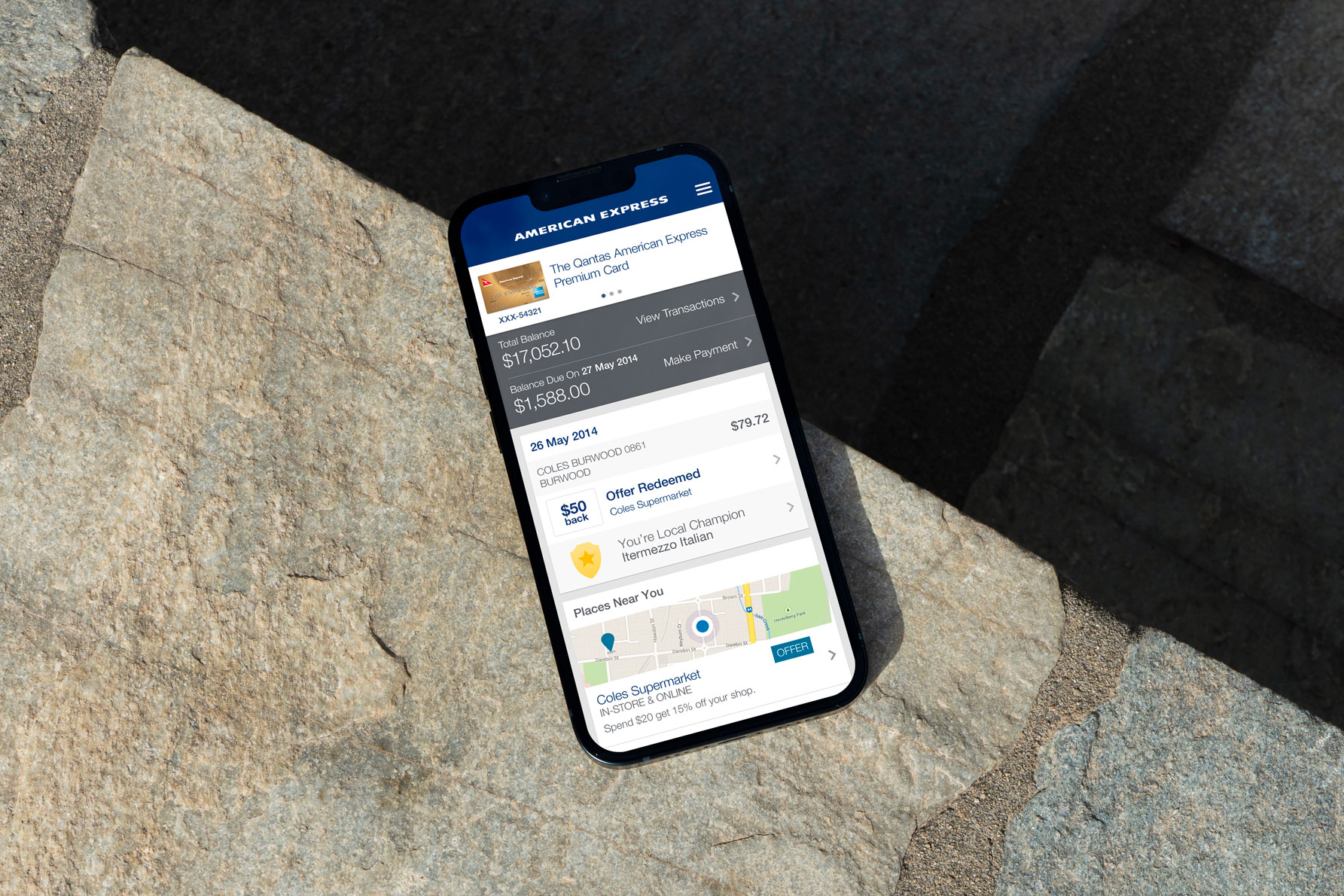 During my time at ustwo I worked on the AMEX mobile app for one year in 2015. I took the baton at a time when AMEX was already an established client of ustwo, and I carried on the work on the mobile design introducing new features and conducting experiments.

On ustwo's side we were a team of two: a UI Designer and me covering the role of Project Lead and UX Designer - but we also collaborated closely with 2 Product Owners on AMEX's side and a large team of developers working remotely. We used to spend the day working offsite from the AMEX offices in London, where we could attend daily stand ups with the dev team and facilitate co-creation sessions with the PO and stakeholders.

In this role I was not only responsible of the overall design quality of the app, but I also took ownership of the product as a whole and managed (and nurtured) the relationship with the client.

Process
We progressed by picking up new features already planned to be released from a backlog, but we had a very hands-on approach in the design process and made some room for explorations.

Usually I started with sketching the new feature on paper with markers, just as simple as that. Sketches of the screens, connected by arrows as to form screen flows, with comments added below when needed, all done by hand in order to make ideas move quickly and immediately discuss them with the team. Once the overall flow and screens were defined, I'd recreate a tidier version of the flows in Axure and then design wireframes and prototypes with the same tool. 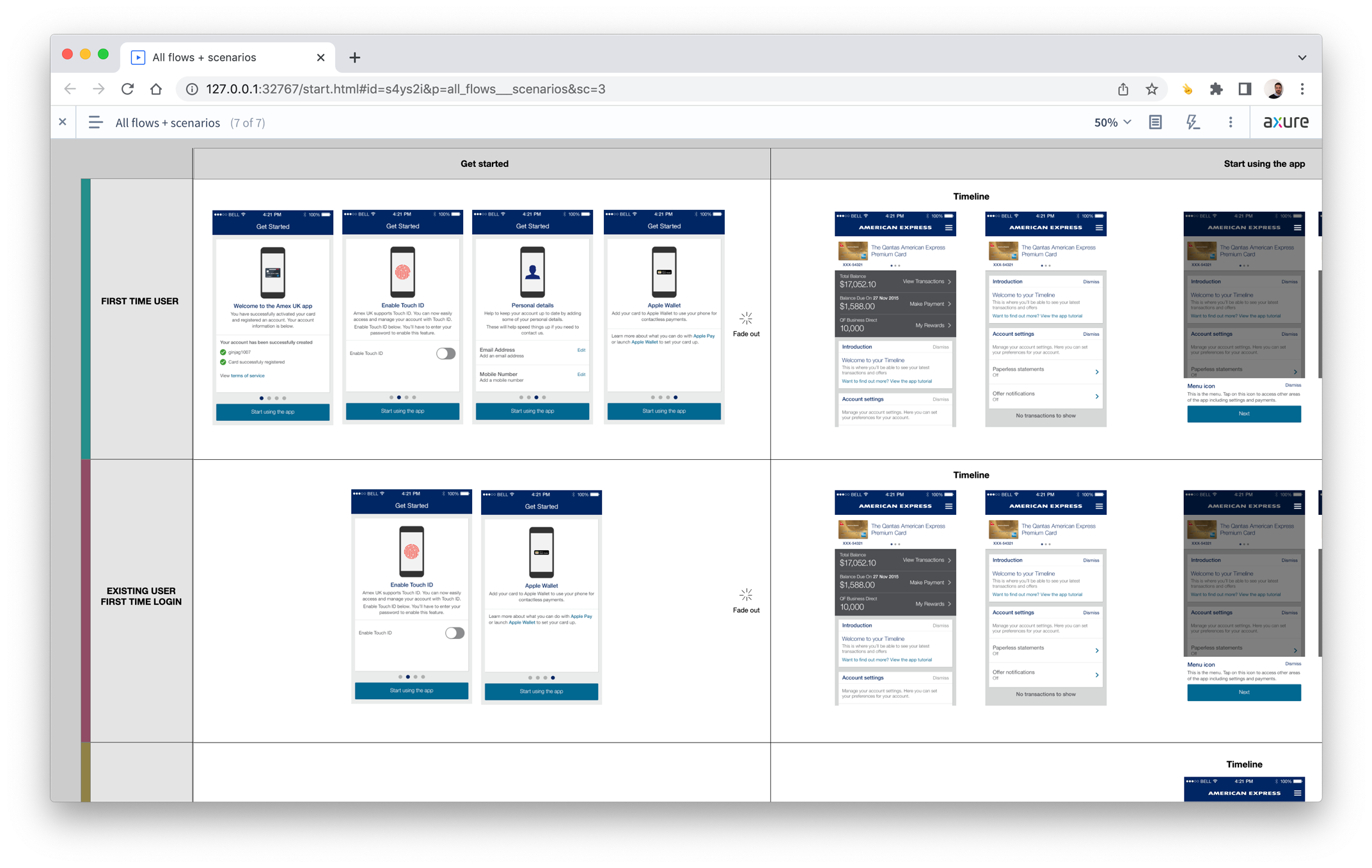 A User Journey of the app's Onboarding designed in Axure. 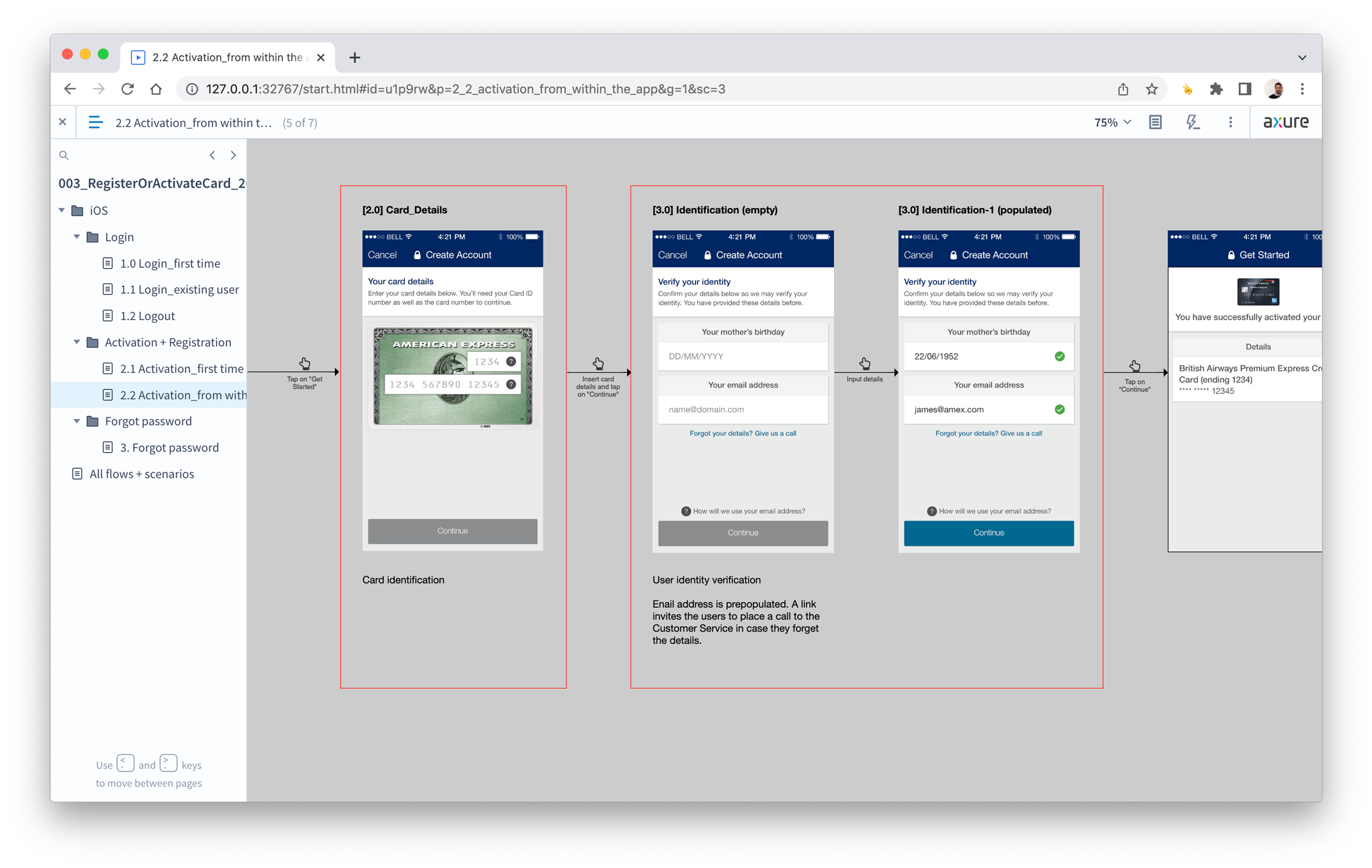 Screen flow and detailed wireframes of the Onboarding journey designed in Axure.

We used to create video prototypes of the most relevant flows - for example, the Onboarding above.

User testing
We always stressed with the clients the importance of running testing session with the users, as much as needed, in order to get first hand feedback on the design and concept we wanted to implement. Since Amex is such an established financial institution worldwide and it's defined by sometimes rigid corporate dynamics, it hasn't been always easy to introduce such activities in our project flow.

I participated to a few sessions, we usually prepared all the objectives and materials (prototypes) before hand and delivered all to a testing agency in London who was in charge of recruiting participants and run the test in their officies, where they could use their professional recording equipment and facilities. 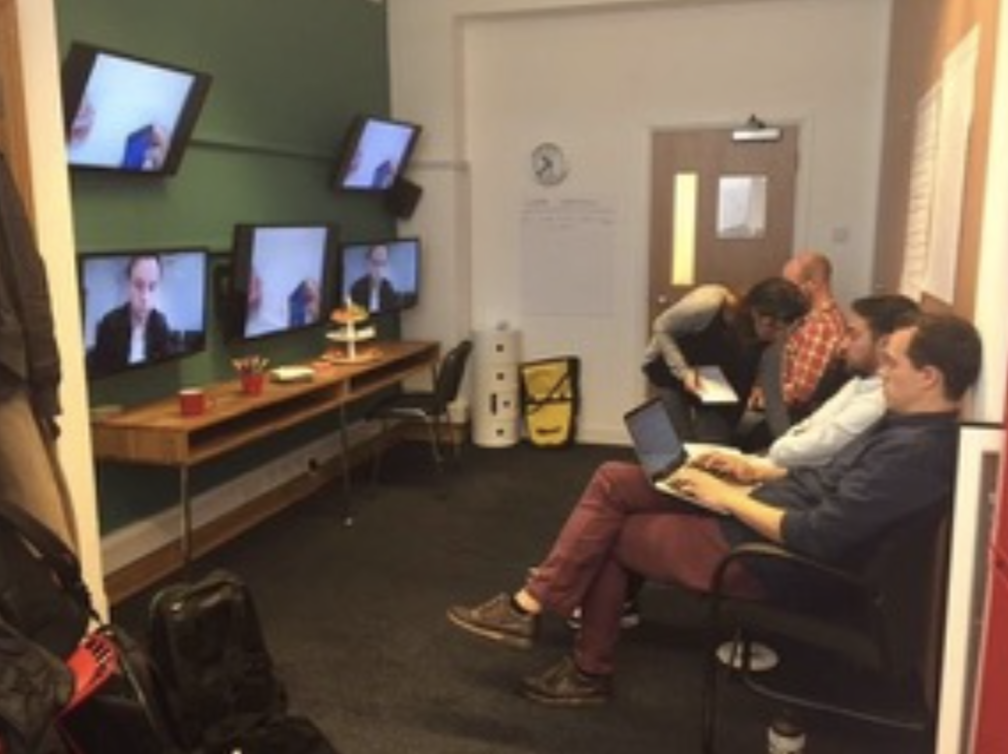 This is us observing the user test in a dedicated room at the agency's office. 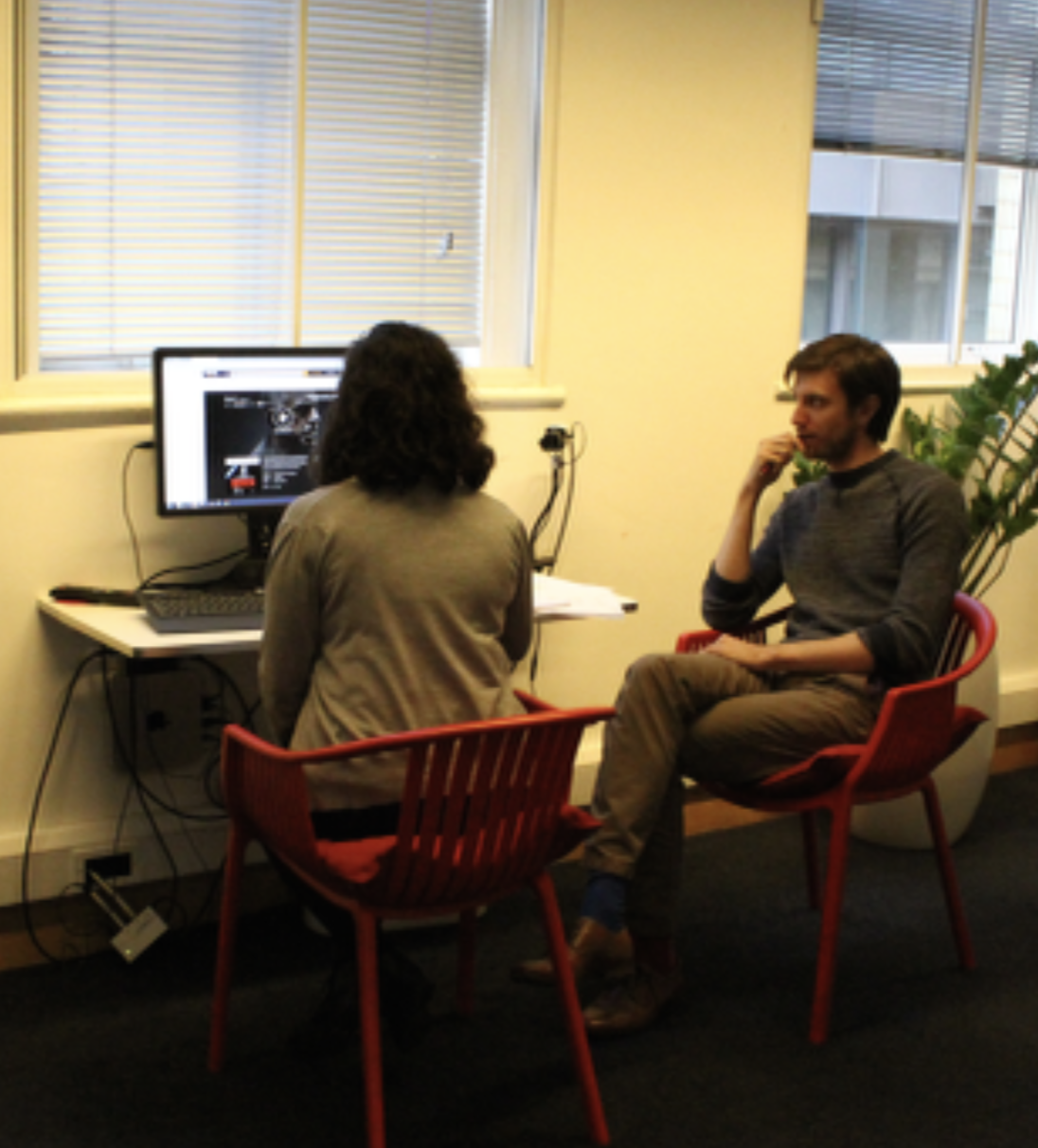 The user testings usually included a series of participants involved in 1:1 sessions run by a facilitator from the agency and lasted about 1 hour.

Explorations
2015 was an exciting time for the design community because Material Design was still in the news after 1 year since its release and Apple Watch had just arrived.

At ustwo we were inspired by these innovative technologies and I had the chance to experiment with new concepts and behaviours applied to the financial sector and propose them to the client as future implementations. 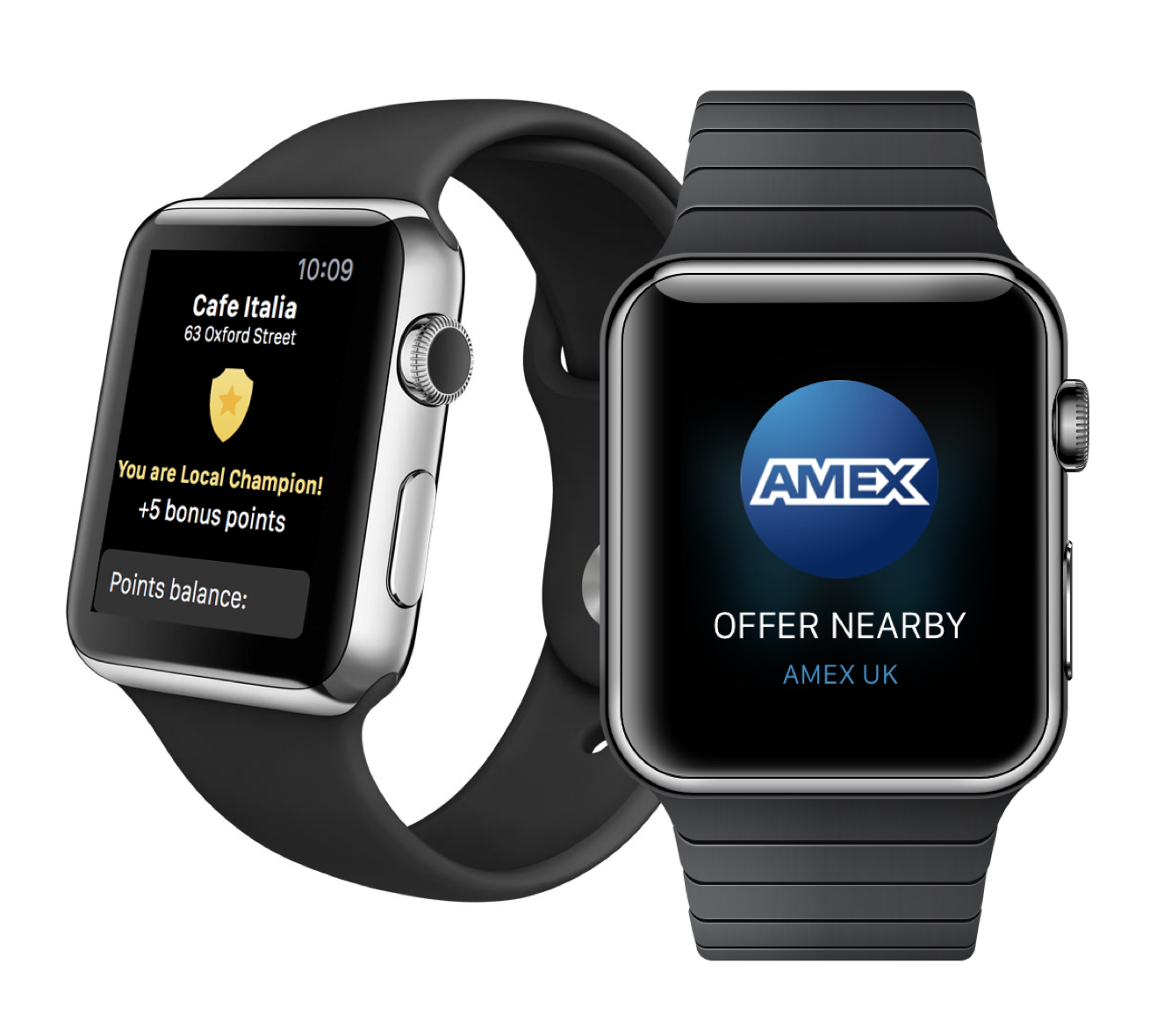 One of the explorations we did was a concept for the AMEX app on the Apple Watch, for which we took advantage of all the new possibilities that the device could offer.

In particular, we envisioned a new way of interacting with the sourrounding shops and offers as one person is out and about, receive notifications on the watch about new offers nearby and take a glance at spendings and balance any time at the user's convenience.